Could FEMA do a better job with our wildfire pandemic?

Up Front: Nature doesn’t give a damn which political party you claim

COVID congratulations to the U.S. Forest Service, but….. (Part 1)

“I want to be remembered for my honesty and hard work.”

Thank you all for joining the Freres family in this celebration of Bob’s life.

Most of you do not know me.

I am Jim Petersen. Rob asked me to say a few words about his Dad, possibly because I personally knew most of the Oregon lumbermen who were Bob’s peers, but more likely because Rob and I have been friends for nearly 30 years.

Bob Freres was the last man standing. By that I mean he was the last living lumberman of his generation – a generation marked by an astonishing national transformation that began with the end of World War II and is often characterized as the greatest industrial and technological expansion in the history of civilization.

With Bob’s passing, we close the history book on not one, but two generations of extraordinarily gifted lumbermen whose contributions to our nation’s economic, social and environmental well-being cannot be overestimated, though they are often overlooked and underappreciated. Their dedication to their companies, their employees and communities is unrivaled in western history.

Freres Lumber Company was Bob’s life for more than 70 years. For 20 of those years, his work life overlapped that of his father, T.G. Freres, who founded the company on a small bluff overlooking the North Santiam Canyon in 1922.

And for 39 more years, Bob’s work life overlapped that of his brother, Ted, the youngest of T.G.’s sons. I tell their remarkable story – with a lot of help from the Freres family – in Santiam Song.

If you Google the word Freres you will find the French word “Frere” and several rough translations: brother, brotherly love and filial love – the love of child for a parent.

All three meanings fit the Freres family very well. All three speak of their deep devotion to their employees and the communities that make up the Santiam Canyon – perhaps especially Stayton and this church.

Their dedication seems to be genetically-wired – passed down from T.G. to his sons: Bob, Bud, Larry and Ted and his grandsons: Rob, Kyle and Tyler, and his grand-nephew, Eric Ortiz.

I did not know Bud or Larry, but I knew Bob and Ted quite well. In fact, my wife, Julia, and I were last in this church for Ted’s service a year ago last June. In the early stages of my research for Santiam Song Ted graciously and patiently spent hours and hours with me explaining complex manufacturing processes that came naturally to him. He was a manufacturing genius – in my mind as good as Henry Ford or Ford’s General Motors rival, Alfred P. Sloan.

Freres Lumber became Bob’s company to run as he saw fit after his father fell ill,  and it remained his and his alone until Ted was old enough to join him. I am not at all sure how Bob survived the stresses and strains that befell him in the in between years, but he did.

When I asked him how he did it he said, “I worked every day.” And then his voice trailed off with the words, “long days and nights.”

When I asked him if he had any regrets, he stared at me for what seemed like an eternity, and then he said, “I regret that I did not spend more time with my kids.”

Maybe that was why he sometimes sang Ave Maria to his children – Rob, Julie, Leslie and Beckie – at the top of his lungs as he drove them home from Sunday Mass here at Immaculate Conception.

Was he simply entertaining his kids or was there some larger meaning involving the prayer that is Ave Maria?

The Bob I knew didn’t spent much time wandering around in life’s emotional weeds, so I can’t answer this question except to echo his regret that he had not spent enough time with his children.

Frankly, I have a hard time hearing Bob singing anything – except maybe Frank Sinatra’s signature song, My Way.

Regrets. Yes, he had a few, but then again, too few to mention. He did what he had to do and saw it through without exemption. And yes, there were times when he bit off more than he could chew, but through it all, when there was doubt, he ate it up and spit it out, and faced it all and stood tall, and did it his way.

Bob wasn’t the warm, fuzzy type. He was a stoic, like my own father who had a hard time expressing himself. Words didn’t come easily to him. And yet – again like my father – Bob was blessed with a marvelous dry wit.

One morning I caught him opening and reading the mail at the front counter in Lyons, every piece of it – including the junk mail!

His boyish response to my bemusement suggested that he thought I’d caught him with both hands in the cookie jar. “You’d be surprised what you can learn about your own company just by opening the mail.”

I silently thanked my lucky stars that all my communications with Rob were by phone or email.

Bob wintered at Indian Wells for years. It was there that we began what became a long and often brutally candid discussion about his life. Early on, he doubted that anyone would be interested in the Freres story, but by the time we got together in the desert he was all in, though he often reminded me that he feared that his memory was not as good as it once was. But he wanted to talk. And talk we did.

I don’t think he ever got over his mother’s death. Tresa died when he was eight. He was the second of her four children with T.G. Larry, Bud and Phyllis preceded him in death. Their passing also left big holes in Bob’s life.

One of the first stories Bob told me was about asking his father if he could go on the honeymoon when T.G. and Frances married in 1939. Wouldn’t you have loved to have been a mouse in the corner for that conversation!

But T.G. did take Bob – and later Ted – with him whenever he could. One of Bob’s earliest memories of his father was going with him to look at a timber sale in the North Santiam. Bob thought he was maybe nine years old. He took me to the same spot on one of our trips into the canyon. It is again covered with towering and still growing Douglas-firs.

By my back of the envelop estimate, Bob’s almost daily trips to and from home and the mill at Lyons spanned at minimum 894,000 miles. That’s a round trip to the moon with 417,000 miles to spare. It’s nearly 36 trips around the world, done in increments that averaged 35 miles a day. That’s dedication. That’s filial love. That’s the generational Freres work ethic.

Santiam Song is the fourth book I have written about Oregon lumbermen. I have asked them all one difficult question: How do you want to be remembered? To my amazement, they all give versions of the same answer.

Bob’s answer won’t surprise anyone here this morning. He said, “I want to be remembered for my honesty and hard work.”

“I don’t know what else it would be,” he replied. “Dad started us out, Larry, Bud and I followed along, then Ted and I, and now my son and nephews are following in Dad’s footsteps.”

This following is seen in deliberate and easily traced steps that begin with crude steam-powered circle saws and end – for the moment at least – with mass panel plywood, the most advanced engineered wood product on earth, a product lighter but stronger than steel, manufactured by computer numerical control machines, that has already found its way into architecturally designed high-rise buildings with environmental footprints far smaller than structures built from steel and concert.

This is my unapologetic commercial for using more wood, not less! It’s renewable, recyclable and biodegradable.

This family’s marvelous gift for thinking big and giving big can also be traced through T.G.’s formation of the Freres Foundation, which has showered millions of dollars on this canyon’s schools, hospital, youth activities and social programs.

Bob’s song is ended, but in the lyrics of a lovely Irving Berlin song by the same name, the melody lingers on, and it will echo up and down this beautiful canyon for as long as there is a Freres Lumber Company. 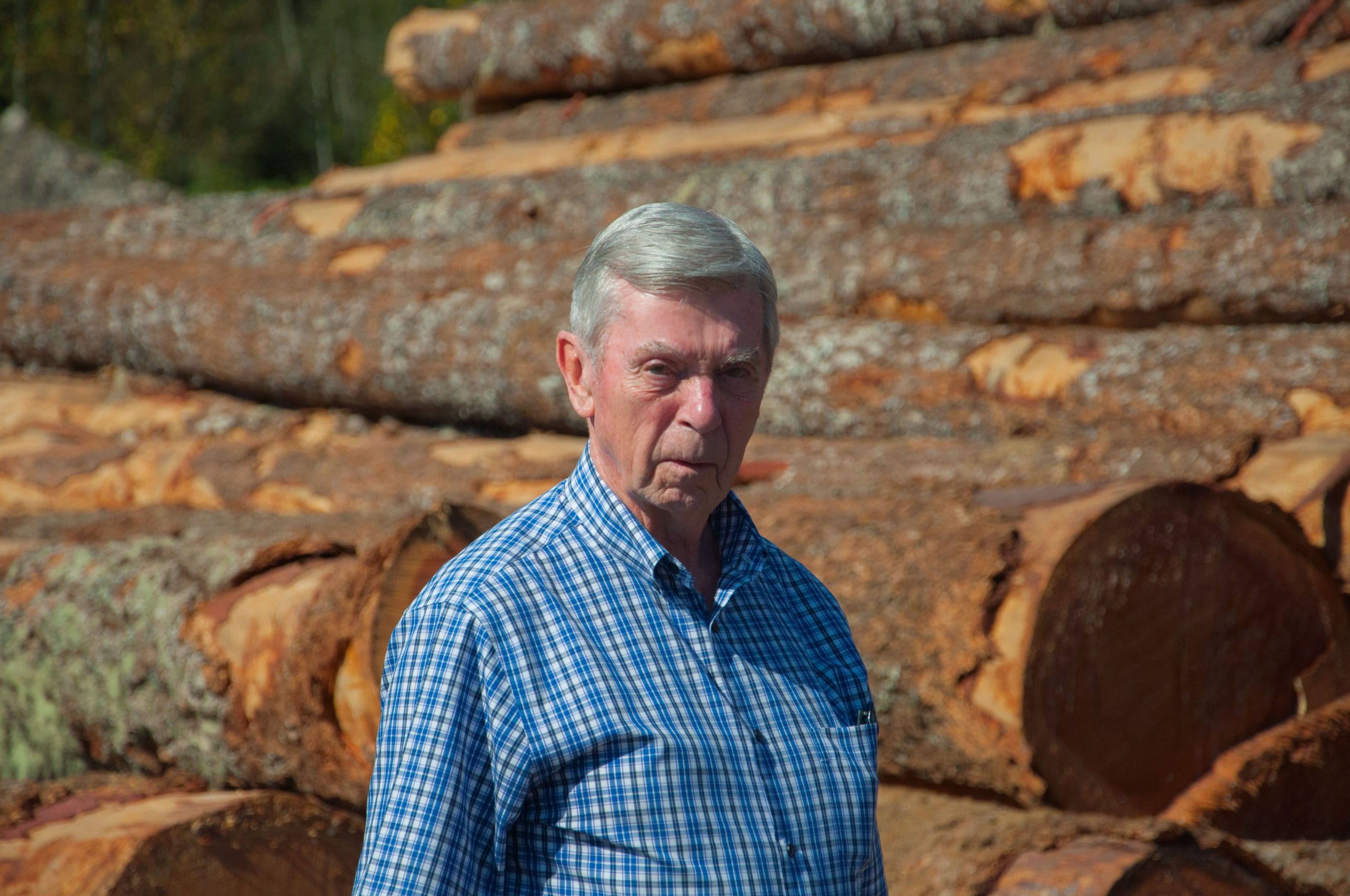 We Now have a weekly newsletter!

Review Evergreen’s posts for the week and see what Jim has to say about what is going on in the forestry world and beyond – in his new Blog – "Up Front."
Sign up to receive our weekly newsletter and never miss a post! … See MoreSee Less

When you support Evergreen, 100% of your tax-deductible contribution goes toward extending our reach and amplifying our voices for actively managed forests and lands.