Counties on FireFeaturedThe State Of Our Forests

Bob Roper on Wildfires and What to do Next

Mr. Roper brings 40 years of firefighting experience to this discussion, so we’d suggest you read what he has to say because, in our opinion, he has artfully lanced a festering boil the political classes continue to ignore.

After you’ve considered Mr. Roper’s recommendations for corralling big wildfires, for context read A Sea Change in How Federal Judges View Collaborative Forest Restoration Projects, Part II. Together, these essays connect the most distant dots in a discussion-turned-debate that serves the needs of its architects very well, but fails to address public need or the needs of the West’s collapsing National Forests.

Reinsurers are already talking about increasing the rates they charge insurance companies for losses beyond claims insurers normally pay from their own cash reserves. Another wakeup call for federal, state and local elected officials who have refused to heed Mr. Roper’s recommendations.

As wildfires burn in California and elsewhere, causing deaths and billions of dollars in property losses, elected leaders will surely commission new and time consuming “Blue Ribbon” studies to explore the reasons that made these fires so damaging. Let me offer a viewpoint that simply states it’s the elected leaders (federal, state, local) and the citizenry that have ignored the results of previous “Blue Ribbon” studies and may ignore new recommendations in the future.

Philosopher George Santayana said, “Those who do not learn history are doomed to repeat it.” This point is certainly true of fire in the wildland urban interface neighborhoods of this country. The fires that once only occurred during a certain period of the year are now becoming year round threats. These same fires are mainly in the West, but as demonstrated last year in the Southeast (Gatlinburg), wildfires do not respect jurisdictional lines, or geographic areas. Year after year, devastating wildfires occur that cause death and destruction, cost millions of dollars to fight and billions of dollars expended for recovery along with secondary flooding issues.

Year after year, wildfires occur, lives are lost, homes and infrastructure are damaged. As these areas recover, we often allow residents to rebuild using the same narrow streets and construction types expecting different results. It is the responsibility of our elected leaders to stop a repeat of wildfires’ devastating losses.

Elected leaders are using “climate change” as the #1 sound bite for the reason why today’s wildfires are so damaging. Whether a person believes in climate change or not, today’s fires are becoming more damaging because of unhealthy landscapes, reduction of commercial logging, population growth into wildland fire areas and increased frequency/scope of wildfire incidents. Some policy makers are now referring to these fires as the “New Normal,” yet the “Normal” is really the inaction of tough policy decisions. This “Call To Action” to our elected leaders is sorely needed as staff has been performing the underlying research and action at the staff level, and now major policy action must be accomplished if we truly desire a different result. Too many firefighters and public lives have been lost along with billion of dollars in recovery costs. Recovery costs include fire suppression costs plus the true cost of a wildfire; loss of tax base, secondary job losses, siltation of water sources and post-fire flooding, etc. Its time that our elected leaders step up and do their part.

These things must happen:

Restore & Maintain Landscapes
• EPA standards need to weigh the negative effects of uncontrolled smoke during a wildfire versus conducting controlled burns to restore the landscape.
• The environmental review process to approve landscape treatment projects needs to be streamlined.
• Congress must develop a funding source for federal fire agencies that does not supplant prevention dollars to suppression dollars.
• State and local governments must recognize their responsibility and fund wildfire activities themselves and not be solely reliant on federal funding.
• We must develop legal immunity provisions for government agencies, non -governmental entities and private parties to encourage proactive landscape treatment actions for a backlog of projects.
• Government must empower people who live off the land to be its stewards. These groups (Native Americans, foresters, farmers and ranchers) are the best land managers around because they know that well-managed lands will yield the best resources and agricultural products. They do not need government telling them how to manage their land because they live the need for renewable land every day.

Building Fire-adapted Communities
• Local, state and federal lawmakers must create and enforce legislation that regulates building practices in fire-prone areas.
• Government needs to create and enforce defensible space programs to protect assets at risk.
• Mandate insurance companies to require “Ember Environment” protected development and maintenance of properties.
• Government must realize that there are limits to what regulations can do, and require personal responsibility. Self-sufficiency and personal responsibility needs to be demanded to wean the public off government reliance before, during and after a wildfire.
Wildfire Response
• Modify FEMA provisions to encourage full use of local and private resources before, during and post emergencies.
• There needs to be new funding sources to ensure that new growth in wildland fire areas have a corresponding increase in fire prevention/suppression resources.
• Revise aid and historical contract provisions to ensure “closest resource” concept is utilized across federal, state and local jurisdictions.
• Commission a person or oversight body to monitor forward progress of these actions and report back to local, state and federal legislative bodies.

Wildfire is a fact of life in the West and many other areas around the nation. People can learn to live with fire, but it requires a commitment from those living in the wildland urban interface and from all levels of government. People can successfully build Fire Adapted Communities that employ defensible space, strict building codes, emergency access and emergency preparedness. This information and resources are widely available, but often unused or not employed.

At some point, government and the public must recognize the fact that there are simply not enough fire engines to place one at every house during a wildfire. And, even if there were, firefighters, helicopters and air tankers can only do so much to save a community that hasn’t done the things it needs to do to protect itself against a firestorm.

Our elected leaders are in complete control to address the components that can significantly reduce the wildfire problem, but like all topics affected by special interests; they are influenced in making hard decisions and retaining a voting majority. Elected leaders can control how we manage our landscapes, where people build, what fire/building codes to use, creation of enforced defensible space programs, etc., but have to make tough decisions. They can also mandate the insurance industry to regulate similar practices and enforce how people maintain their properties, so those wanting to live in harm‘s way are the same people who bear associated costs. Instead of making these tough decisions, elected leaders often wait until wildfires occur and demand firefighters and aircraft put the fire out. They know that sexy media displays of flames and firefighters will get legislative suppression funds as history repeats itself time and time again.
The question becomes: Will our elected leaders do what is needed to address the wildfire issues or will we have another repeat situation? Legislators continue to commission “Blue Ribbon” reports after devastating incidents, yet little gets done with the recommendations. One can simply look at these after-action reports from across the nation, year-after-year, and see the same basic recommendations at the local, state and federal levels. Einstein defined “INSANITY” as, “Doing something over and over again, expecting different results.”

It is time for different results before another life is taken or structure is destroyed.
We have analyzed the wildland fire problem enough and identified actions in the National Wildland Cohesive Fire Strategy. The wildfire problem was not created by only one level of government, but will take all three levels of government (local, state, federal) coupled with non-governmental entities and the public working in unison to fully implement the resolve. The wildland fire problem cannot be completely eliminated as Mother Nature cannot be fully controlled, but our elected leaders can be true leaders, take hard positions, make tough decisions and truly make a difference, or we can wait until the next wildfire to see if the problem takes care of itself. If we take action, there can be a true “New Normal” paradigm, otherwise continue to expect these large devastating wildfires and the true cost of wildfires to greatly escalate.

Bob Roper is the retired Fire Chief from Ventura County, CA and the retired State Forester of Nevada. He served as the FIRESCOPE Chair and participated in the Congressional directive National Cohesive Wildland Fire Strategy development. He was a member of Governor Schwarzenegger’s Blue Ribbon Commission following the CA 2003 Firestorms. He has spent 40 years in the fire service focusing on wildland fire topics. 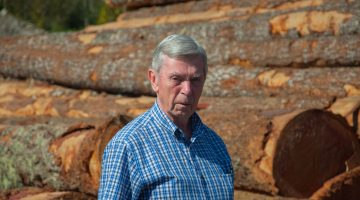