EnvironmentThe State Of Our Forests

Bruce Courtright: The U.S. Forest Service…Headed For Extinction Or Revitalization?

Count us among those with definite opinions about what is needed to fix what ails the U.S. Forest Service. Given the agency’s high praise for forest collaboration, we were very surprised by the silence that fell over the agency after the Alliance for the Wild Rockies sued to stop two well vetted projects: A to Z on the Colville National Forest, and the East Reservoir Project on the Kootenai National Forest.

Last Friday, October 14, federal judge, Rosanna Malouf Peterson, ruled that A to Z  loggers could proceed. The Forest Service had ordered a halt to their work last summer in response to the Alliance’s suit. Alliance attorney, Brian Ertz told Judge Peterson that the project was an affront to AWR member preference for an undisturbed forest. “The trees are coming down,” he said. “That’s harmful to our members.”

Attorney Lawson Fite, who represented Pend Orielle and Stevens counties, countered that A to Z was vital to the communities he represented, so much so that it had drawn together a group of environmentalists, elected officials and a lumber company (Vaagen Brothers) to work toward a common goal – the A to Z project proposal.

Why Forest Service leadership refused to publicly defend A to Z or the East Reservoir Project, and the role stakeholder groups played in crafting them, is impossible to understand, much less justify.

We’ll hold our opinions as to what is needed to steer a course correction within the agency, deferring instead to Bruce Courtright, the only USFS retiree we know who holds an undergraduate degree in Industrial Relations, and a graduate degree in Organizational Psychology. The Forest Service’s one time Chief of Management Improvement has a long history of advising state and federal resource management agencies, and is certainly well qualified to assess the agency’s seeming breakdown.

Mr. Courtright, who chairs both the National Wildfire Institute and the Coalition of Fire Safe Councils, writes from his home in Fort Jones, California.

This is the second of two essays focusing on Mr. Courtright’s collective experience and knowledge.

The US Forest Service – Headed for Extinction Or Revitalization?

The once loved Smokey Bear that we all grew up with was a symbol of the vast wealth of resources available to serve the needs of a growing nation. The Forest Service was recognized as the premier land management organization in the world, with little dispute over its quality of resource decisions.

A new critter emerged: faster, sleeker and more adaptable. It was an environmental velociraptor, able to tie the Forest Service up in litigation and diminish its reputation with America’s public. This attack has continued over the years weakening the Forest Service and preventing it from protecting and managing our nation’s forest resources.

In its wisdom, Congress authorized our Presidents to reserve certain public domain lands via what is now called the Forest Reserve Act of 1891, which provided a pathway for forest management later clarified in the Organic Act of 1897. The intent was to secure the nation’s resources in perpetuity for the betterment of all its people. The Act specified how the lands were to be managed – with clear direction to land managers to provide a continuous supply of timber and adequate water flows to insure the nation’s economic stability.

Numerous other Acts followed, codifying the Forest Service’s responsibility for administering almost 193 million acres of National Forest and Grasslands. The challenges facing the agency have become more complex , especially over the last 20 years, as public and congressional support have declined.

The impact of declining support can be characterized in many ways, none more visual than tree mortality in California forests – a direct and dramatic result of our warming climate, which is causing significant tree mortality. More than 70 million trees stand dead or are dying, a result of unprecedented epidemics of insect and disease in forests that are so dense that they are cannibalizing themselves. The root cause is reduced forest management, a response to overly constraining environmental laws and regulations, widespread litigation, and escalating wild-land fire suppression costs that force the Forest Service to cannabalize (there’s that word again) its own forest management budget.

The cumulative effect of these events is seen in wildfires so ferocious that they have no precedent in known ecological history. These fires are consuming millions of National Forest acres annually. The heat from these infernos is go great that it is reducing to sand the organic and mineral layer in which seeds germinate. We are in danger of losing one of our nation’s most valuable resources – productive landscapes and the clean water they yield.

The upshot is that a once proud organization – acclaimed by many as the most effective in government – is now perceived as ineffective and ignorant of forest science. Alsovalarming: the Forest Service’s historic management mission of is seen by many in urban environments as the enemy of the forest, and is blamed for the political agenda plaguing our environment.

Wildfires are being fought with directions to Incident Commanders that there should be no risks taken that put firefighters in harm’s way. For example, fire lines are often far from the active fire and indirect fire tactics are used when the goal should be to put out the fire quickly. We wonder if city firefighters could put out building fires by determining the perimeter of the attack, and start by cordoning off an entire city block. We fully understand the notion of unnecessary risk and exposure in fighting wildland fire, but achieving “no risks” to firefighter is probably not attainable.

It appears from the outside that the Forest Service organization is struggling to find its way in an increasingly complex society and environment. What we see are attempts to reach out to various citizen groups and the resulting formation of citizen/stakeholder collaborative groups that are asked to help the Forest Service get on-the-ground resource work done – the hope being that the collaboratives represent sufficient political horsepower to reduce the treat of project appeals or litigation.

Management focus has thus shifted to stewardship projects that often involve multiple land ownerships bordering National Forests. At the same time, on the outside we see the Forest Service focusing more inwardly on issues associated with business and processes like improved safety and increased workforce diversity. These areas are important of course, but it appears that a large part of the organization’s time and energy are expended on work that may not be directly associated with the land stewardship mission.

Simply put, emphasis needs to be focused on the land conservation mission and not on the tactics of running the organization.

The recent steps being taken by the Forest Service Pacific Southwest Region (Region 5) may be the start of a new direction by the agency. They devoted a Regional Leadership Team meeting to identifying a new way of landscape level management with much more focus on facilitating, learning, conversing, and providing contributions to the public and communities.

The Forest Service identified the following shifts in policy:

We recognize the risk that the Southwest Region is taking to change its operational tactics and long-held managerial style. There is a real need for new methods to make headway in a rapidly changing world with shifting priorities, but we caution that it will be hard to make such a dramatic a change in an entrenched organization culture characrerized by often rigid norms. The Regional Forester was clear that ecological restoration will remain a key priority for the region, but it is not known how widespread such direction is among other regions. The advocated evolution from an autonomous organization accustomed to calling its own shots to a more facilitating one will be challenging!

We are focused on the Southwest Region’s attempt at organizational re-direction because we are not aware of similar efforts to recognize and embrace the need for internal shifts that respond to societal and organizational change.

Some of the Region’s collaborators and supporters are concerned with this shift and potential outcomes:

The following issues must be addressed at a national level:

If the Forest Service chooses to make the much-needed changes to their organization (structure, mission, goals, policies and culture) they have the potential to emerge as a sleek, agile, facilitating organization that will meet the conservation challenges of the 21st Century and beyond. The time is right for a new more focused direction to meet the challenges of a changing climate, unstable world economics, and a citizenry that is fast encroaching on areas adjacent to the National Forests.

With this shift, the essential next steps include:

In our selected example of a major shift in direction at a Regional level (Region 5), the Region retained the Forest Service Chief’s five focus areas of restoration: fire, communities, diversity and inclusion, and safety. The processes of learning, collaborating, facilitating, framing questions, and not focusing on targets can suggest a lack of concentration.

If attention to process takes primary attention versus real restorative actions on the land (ecological restoration), it can be confusing to the public and congressional decision makers.

What the public and Congress want from a conservation agency like the Forest Service is a clear strategy and specific tactics to take care of America’s natural resources and to improve the lives of citizens and communities.

Sometimes organizations have to “think big and act big.” This hasn’t been a recent strength of the agency. If ecological restoration is to be the driving focus, are we thinking big enough to insure that the pace and scale is adequate to insure healthy, sustainable forests that are resilient to disturbance?

Special thanks to the National Wildlife Institute’s board members, Ray Haupt and William Derr, as well as Michael Rains for their insightful comments and the writings of the California Forestry Association.

Next post Peter Goldmark: Washington’s Forests East of the Cascades...Not A Pretty Picture 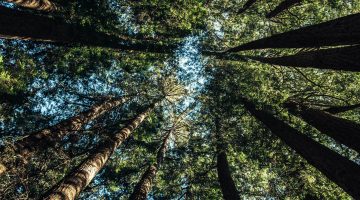