The State Of Our ForestsWildfire

Editor’s Note: Evergreen Readers will be familiar with our colleague, Michael Rains, one of the finest minds the U.S. Forest Service ever employed. Now retired following a distinguished 30-plus-years with the agency, he tutors children with special education needs, mainly from his Broomall, Pennsylvania home.

Mr. Rains wrote the President a five-page letter on June 19 that is easily the best description of the West’s wildfire crisis we’ve ever read. We posted it on our site then and it can be read again here. After President Trump’s Latest visit to the site of the Camp Fire in Paradise, California, Mr. Rains writes to the President once more to offer his thoughts and a more specific action plan to address the wildfire crisis at hand. If you are interested in more information, Evergreen conducted a 5 part interview with Mr. Rains as well and the first and subsequent parts can be found here.

Dear Mr. President:
Once again, I am writing you about one of the most critical land conservation issues of our time. That is, controlling wildfires. My position has been very consistent. Fundamentally, “…the management of America’s forestlands needs to be emphasized so wildfires can remain smaller and begin again to be a tool for improved forest health as opposed to destructive events that destroy lives, communities and landscapes.”

Recently, you were in Paradise, California. Thank you for going. You witnessed firsthand the terrible destruction to lives and property resulting from uncontrollable wildfires. To date, 84 people have been killed by the Camp Fire. Hundreds more are still missing. It did not have to happen.

In my most recent letter to you on September 2, 2018, I mentioned your August 16, 2018 Cabinet Meeting. You spoke about the need to improve the maintenance of our forests to reduce the threat of wildfires. At this meeting, and since, the Secretary for the Department of Interior concludes that the current situation of uncontrollable wildfires is due to “gross mismanagement [of the forests].” Actually, what Secretary Zinke is saying is not accurate. It is not mismanagement. It is little or no forest management.

Lately, you have used the term forest management quite often. You are right. The lack of sustained forest management is the primary culprit of these large-scale fires of almost indescribable force. And, when we use the term, “forest management”, this is not limited just to trees. For example, the chaparral forests of southern California or the mixed vegetation, including trees, that make up the 138 million acres of urban forests are part of the landscapes at risk. Yes, this issue includes the complex rural to urban land gradient and its proper maintenance or management.

I believe that the impacts of a changing climate are also part of the problem, especially in the west where extended droughts have stressed a wide-range of vegetation, including trees, creating volatile fuels that produce high-intensity fires like never before. But, if I could choose only one thing to be synchronized in landscape scale conservation, it would clearly be forest management with fire management. “Fixing the forests” will eventually prove to be the elixir of success in reducing the destructive impacts of wildfires. You are right. Now is the time to do something about it.

Currently, about 60 percent of the United States Forest Service budget goes toward fire suppression. For perspective, in 1995, fire made up about 16 percent of the United States Forest Service’s annual appropriated budget. As more and more of the agency’s resources are spent each year to provide the firefighters, aircraft, and other assets necessary to protect lives, property, and natural resources from catastrophic wildfires, fewer and fewer funds and resources are available to support other agency work—including the very programs and restoration projects that reduce the fire threat. A paradox has developed. As funds are shifted away from forest management actions, fires have become larger and angrier because forests are not being maintained. Along with this paradox, an extreme “funding gap” has also developed.

When I look at the current proposed budgets and the associated Congressional actions for United States Forest Service funding, I would summarize the situation this way:
“…The lack of forest management across America’s landscapes is a key problem. The President is right. And, the current budget is woefully inadequate to change this. For example, the United States Forest Service alone needs an increase of about +$2.2 billion annually for the next 5-7 years to help restore the gap in forest management work that has been created by decades of shifting budgets for fire suppression. Without this increase, things are simply going to get worse.”

To be specific, the +$2.2 billion required by the United States Forest Service for additional investments in forest management should be targeted as follows:

▪ +$97 million for “federally assisted state programs [the Forest Stewardship Program] to address the “…strengthening the stewardship of private lands”, as recently stated by USDA Secretary Perdue.
▪ +$600 million for hazardous fuels reduction [this brings the overall level for the United States Forest Service to about $938 million].
▪ +$26 million for fire science and technology development [including defensible space protection in the Wildland Urban Interface].
▪ +$45 million for the cooperative fire programs.
▪ +$14 million for forest health protection [specifically, invasive species control].
▪ +$1.385 billion for management actions on the National Forests.
▪ +$33 million for biomass uses that include wood-based nanotechnology [cellulose nano-materials], specifically addressing low value wood, such as hazardous fuel.

To some, +$2.2 billion may seem significant. It is not, especially when compared to the losses American taxpayers are facing each year in wildfire-related damages to infrastructure, public health, and natural resources — $70 to $350 billion.” No doubt, the benefits to costs for aggressive forest management is enormous.

I was born and raised in California and I know the area that the Camp Fire destroyed very well. As of a few hours ago, 563 people still reported to be missing. The town of Paradise has been wiped off the map; almost 20,000 structures including 14,000 homes have been destroyed. But, let’s remember, as bad as the Camp Fire was – it’s almost 100 percent contained – there are others like it or even worse and there will be more. If we do not start now to begin a forest management campaign, things will only get worse.
Please, I urge your Administration to act immediately. Issue an Executive Order calling for a comprehensive strategy to ensure healthy, sustainable and more resilient forests as well as an annual Appropriation increase for the United States Forest Service in the amount of $2.2 billion so your Executive Order for aggressive forest management can be effectively deployed.

Article Name
Michael Rains post Camp Fire letter to Trump
Description
Mr. Rains wrote the President a five-page letter on June 19. We posted it on our site then and it can be read again here. After President Trump's Latest visit to the site of the Camp Fire in Paradise, California, Mr. Rains writes to the President once more
Author
Jim Petersen, Michael Rains
Publisher Name
Evergreen Magazine
Publisher Logo 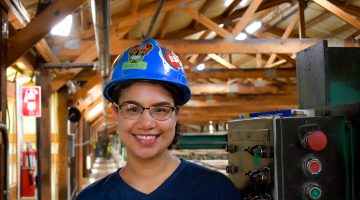