The U.S. House of Representatives has belatedly fixed the fire borrowing mess that has for several years forced the Forest Service to borrow taxpayer money from its forest restoration budgets to pay its ever- increasing fire-fighting bills.

Now it’s the Senate’s turn to do the right thing. There will no doubt be lots of horse-trading in the next day or two. Here’s hoping.

Included in the $35.2 billion House Appropriations Committee’s 2018 Interior and Environment Bill is $6 billion for the U.S. Forest Service, including what appears to be a $2.8 billion appropriation for wildfire prevention and suppression.

Where the federal budget is concerned, the devil is always in the details. We are still attempting to decipher the 56-page Wildfire Suppression Funding and Forest Management Activities Act. It reflects a lot of midnight oil burned to make sure every National Forest stakeholder group got something.

How nice it would have been if the appropriations bill could have been titled the “Wildfire Forest Management Funding and Wildfire Suppression Activities Act.”

Flipping the words “Forest Management” and “Suppression” will seem like a small thing to those who aren’t aware of the profound cultural change that has swept over the Forest Service in the last 10 years, but I am aware of it.

Plainly stated, a Forest Service forest management culture that was decades in the making has been replaced by a fire management culture.  Part of the shift has been a matter of necessity, but the rest reflects a disturbing trend that developed after the federal government granted threatened species status to the northern spotted owl in 1990.

I see it in the most unlikely places, including fire science research suggesting that “managed fire” needs to be allowed to play a larger role in clearing out dead and dying trees in western National Forests.

In such a scenario, fire managers would be allowed to “herd” big wildfires across large landscapes. I have friends in the fire science community who insist this is our only hope for rescuing what remains of the West’s 190-million-acre federal forest estate. I respectfully disagree.

The whole idea of managed fire looks too much like surrender to me. The public will never accept the look of the sparsely-treed landscapes that dominated much of the Interior West a century ago. But it already applauds the visually pleasing thinnings that characterize the work the West’s forest collaboratives are doing in concert with the Forest Service.

I can’t think of a single western watershed that can be sacrificed to the Fire Gods, not when more than 70 percent of the drinking water consumed in the western United States comes from National Forests.

And what about the hundreds of thousands of acres of congressionally reserved fish and wildlife habitat – including spotted owl habitat – that is lost annually in big wildfires?  Why are most of these National Forest acres off- limits to collaboratively-designed forest restoration projects?

Indian tribes don’t leave their fire-ravaged forest un-repaired. Nor do states or private landowners. Yet all landowners abide by the same federal environmental regulations. What’s going on here? I think the cultural shift we see in the Forest Service may have more to do with this than many realize.

Currently, 52 percent of the Forest Service’s annual budget is consumed by wildfire. In 1996, a mere 16 percent was spent putting out forest fires. This shift can’t be explained away by “climate change” or “greedy loggers.” The much larger problem is the “crazy quilt” of conflicting federal environmental regulations that the late Jack Ward Thomas cited so frequently during and after his time as Chief of the Forest Service.

We see this disturbing trend most directly in the alarming decline in the agency’s greatly diminished capacity to fund and complete the NEPA documents necessary to support the landscape scale forest restoration work the Intermountain West’s collaborative groups are rightly advocating.

Here’s an idea whose time has come: for every administratively suitable and available National Forest acre blackened by wildfire this year, a green acre will be assigned to a forest restoration collaborative. I guarantee you the Forest Service’s forest management culture will reappear as if by magic.

Previous post In Our Youth, Our Hearts were Touched with Fire 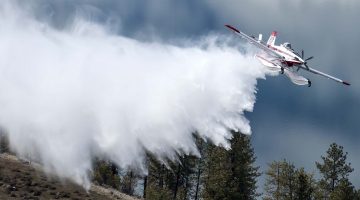