“Certainty is a two-way street. We believe Idaho needs a wilderness bill for the same reasons that we need certainty in our raw material supply. There are still millions of roadless acres here in Idaho. Some of those acres belong in designated wilderness areas, some should be managed as back country and some should be allocated to active forest management with a goal of providing certainty for lumbermen, loggers and counties in which the largest landowner is the federal government. Our company will support wilderness legislation when the time is right.”

Editor’s Note: Marc Brinkmeyer is the Chairman of the Board of the Idaho Forest Group, one of the larger lumber manufacturers in North America. IFG was formed in 2008 with the merger of Riley Creek Lumber Company and Bennett Forest Industries, owned by long time Idaho lumberman, Dick Bennett.

Mr. Brinkmeyer formed Riley Creek in 1981 after purchasing a Brand-S mill at Laclede, Idaho. He had been the company’s Chief Financial Officer since 1973. In 2003, Mr. Brinkmeyer added two Louisiana Pacific mills – one at Chilco, Idaho and the other at Moyie Springs – to his company. Then, in 2008, he merged with Bennett Forest Industries, which traces its roots to the Guy Bennett Lumber Company, founded in 1934 at Clarkston, Washington.

In this interview, Mr. Brinkmeyer discusses the Idaho Forest Group’s long time commitment to Forest Collaboration, a problem solving tool blessed by Congress that provides a platform for lumbermen and conservationists to work through their disagreements concerning the manner in which federally-owned national forests will be managed.

Evergreen: Mr. Brinkmeyer, this will be the first time we’ve talked at length since, when, 2006?

Brinkmeyer: I think so. You interviewed me for a book you were writing that chronicled the history of the West’s independent lumbermen.

Evergreen: That’s correct – and you are off now on a much different venture than your old Riley Creek Lumber Company.

Brinkmeyer: I am. In 2008, I merged my three Riley Creek mills with Dick Bennett’s company. Dick has been a mentor for many years. Our Idaho Forest Group owns five mills, the most recent addition being a Potlatch Corporation sawmill at Lewiston that we bought and rebuilt two years ago.

Evergreen: And IFG is now one of the larger lumber manufacturers in North America.

Brinkmeyer: That’s true, though we’d rather be known as one of the highest quality lumber manufacturers in North America. Our mills are state-of-the-art mills and we employ some of the most talented people in the business today.

Evergreen: It is my recollection that your family roots are in farming in Iowa and Germany.

Brinkmeyer: You have a good memory. We trace our farming roots to Germany in the 1400s. I grew up on our family farm in Iowa. You learn how to work at an early age. I’m mechanical by nature, as are most farm boys, but my education is in engineering and finance. Arthur Anderson hired me after I graduated.

Evergreen: And if memory serves me correctly, you wrangled a job with Arthur Anderson in their Portland, Oregon office.

Brinkmeyer: Correct. I had learned that Arthur Anderson had the largest forest products consulting practice, and I’d been fascinated by the lumber industry since I was a boy. I wasn’t much more than five when I first helped my father unload lumber box cars in Iowa. He’d lift me to the top of the car so I could push boards to him. A lot of those boards bore a Weyerhaeuser stamp, and Weyerhaeuser’s barn kits were big in Iowa. .

Evergreen: So the story here has its roots in a young boy who loves farm machinery and develops an early fascination for lumber manufacturing.

Evergreen: And now you are the chairman of the board of a pretty impressive company.

Brinkmeyer: This industry has been good to me. I’ve had a lot of great teachers over the years, but I owe a lot to Dick Bennett and the late Jack Brandis. I was Jack’s Chief Financial officer at Brand-S. Jack and his father were clients of mine when I worked for Arthur Anderson.

Evergreen: Over the years, we’ve heard lots of lumbermen say that their most valuable asset isn’t their mill. It’s their workforce.

Brinkmeyer: You can always build a new mill, but finding and training a talented work force that understands our technology is difficult. Young men and women today have many professional choices. We talk about the three T’s: timber, talent and technology. You can arrange these in any order you wish, but if you don’t have the best talent, you won’t be successful.

Evergreen: IFG’s mills get most of their logs from state and private lands in Idaho. Correct?

Brinkmeyer: We do, but something like 70 percent of all timberland in Idaho is owned by the federal government. One cannot survive in Idaho without having access to federal timber.

Evergreen: Access to federal timber is then the reason you are have embraced forest collaboration?

Brinkmeyer: That’s true but it is only part of the story. Our industry is long overdue in recognizing the conservation community. We see the collaboratives as a place to become acquainted with people who share our concern for the manner in which our federal forests have been managed, and to educate with respect to our forest practices and manufacturing techniques.

Evergreen: Many believe the simplest solution is for Congress to hand the keys to the states that have national forest land within their borders.

Brinkmeyer: That is a poor idea. But if you believe that the forest management decision making process should be locally centered – and we certainly believe it – then collaboration becomes the efficient conduit for working with local stakeholders.

Evergreen: So collaboration is the way forward?

Brinkmeyer: It has given our company and our conservation partners the opportunity to get to know one another. Our industry has done a terrible job of telling its story. We’re doing better now because we are communicating with conservationists who have historically known very little about us or our mills.

Evergreen: Seems to us that the improvement in communications is due to change in the industry.

Brinkmeyer: Of significance is the fact that the publicly traded vertically integrated companies that owned timberland and paper, panel and lumber manufacturing complexes are gone. Now almost all of America’s lumber and panel manufacturing capacity is family owned.

Evergreen: All the more reason to form strong ties with conservationists.

Brinkmeyer: All the more reason. But lumber manufacturers have not done a good job of defending their place within the agricultural community – and I stress the word “agricultural” because planting, cultivating, harvesting and processing wood is an agricultural process driven by the same work ethic and entrepreneurial principles that have driven farming for centuries. We are all about rural jobs and rural investment.

Evergreen: Conservationists seem to have developed a new appreciation for the economic and environmental benefits good forestry yields, but they frequently remind me that our national forests are much more than Tree Farms.

Brinkmeyer: And they’re right. But our national forests bear no resemblance to Tree Farms. Moreover, good forestry covers a multitude of management goals and objectives – emphasis on the word “management” because it is clear to me that some portion of our national forests needs to emphasize growth, harvest and regrowth, just as we have allocated some portion to designated wilderness.

Brinkmeyer: We have two House members and two U.S. Senators. That’s four out of 535 members of the House and Senate – in a state were 70 percent of all timberland is federally owned.

Evergreen: So what are IFG’s collaborative goals?

Brinkmeyer: The first one will come as no surprise. We need certainty in our federal timber supply in order to justify capital investments, not just ours but those that are made by our logging families. You can’t be competitive in this business unless you are constantly updating your equipment, and you can’t justify the cost if you don’t have certainty in your raw material supply.

Brinkmeyer: “Certainty is a two-way street. We believe Idaho needs a wilderness bill for the same reasons that we need certainty in our raw material supply. There are still millions of roadless acres here in Idaho. Some of those acres belong in designated wilderness areas, some should be managed as back country and some should be allocated to active forest management with a goal of providing certainty for lumbermen, loggers and counties in which the largest landowner is the federal government. Our company will support wilderness legislation when the time is right.”

Evergreen: Those we have interviewed thus far – mainly lumbermen, conservationists – describe an imperfect process that remains vulnerable to serial litigators who refuse to join collaboratives and do not believe federal forestlands should be managed for any purpose.

Brinkmeyer: Congress has seen fit to provide a collaborative platform – a place if you will – where stakeholders can gather to share their concerns and values. The process is time consuming and not yet very efficient, but we’ve come a long way. At some point in the near future, Congress is going to have to address the litigation question. You cannot expect volunteers to work as hard as collaborators do, often for years, only to have their work litigated by those who refuse to collaborate. Collaboration cannot move forward and do what Congress envisioned so long as obstructionists are permitted to block progress. 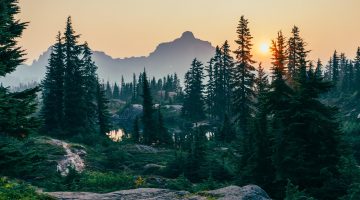