Editors Note: Barry Wynsma retired from the U.S. Forest Service in 2011, following a distinguished 33-year career in which he pioneered the development and implementation of forest restoration and fuels reduction treatments in small diameter timber stands. Mr. Wynsma also writes periodically for Evergreen and is the author of “The Single Use Sustained Yield Act,” a forest management proposal that has been favorably reviewed by several members of Congress. In February 15, 2015, we featured “SUSY” in an essay written by Mr. Wynsma. If you haven’t had a chance to read that proposal, it can be found here.

Back in February 15, 2015, Evergreen published my proposal for Congress to pass a Single-Use-Sustained Yield Act (“SUSY” for short).  My proposed law would essentially designate a small percentage of Federally managed forests for “focused forestry”, with the sole purpose being to manage these designated areas for sustained yield forestry and production of forest products to benefit the public.

Since my proposal was published approximately three years ago, it doesn’t seem to have gained any political traction, yet the pace and scale of active forest management, especially within community wildland urban interface and infrastructure areas, still lags due to the lack of adequate budget and staffing and lack of any real reforms to the NEPA [National Environmental Policy Act] and appeals process to reduce the timeline necessary to quickly initiate fuels reduction/restoration treatments.  Yet wildfires continue to burn within and around communities to the detriment of forest products, clean air, clean water, and infrastructure.

In my opinion, only small advances have been made in the urgent need to increase the pace and scale of active national forest management, most notably the Good Neighbor Authority Congress granted to states within the 2014 Farm Bill, plus a few new Categorical Exclusions also included in the Farm Bill.

Some folks are advancing the idea of trading the current appeals process for a mandatory arbitration process designed to settle objections to proposed management activities, but to me that approach is just putting a band aid on a severed leg because arbitration doesn’t do anything to help reform the NEPA/ESA [Endangered Species Act] analysis process, only the end-game appeals process.

I think it’s time for Congress and the Administration to act boldly and make a major change to how at least a small portion of our National Forests (and Bureau of Land Management forest lands) are identified and managed.

I think that, very similar to how the Wilderness Act designated millions of acres to be mostly left to natural processes and limit human activities, Congress could and should consider a similar Act that designates a small portion of our National Forests for the purpose of focused forestry activities, focused solely on intensive sustained yield forestry practices in order to provide a core level of forest products, jobs, economic stability and certainty.

I’d like to flesh out this idea and also discuss how designated Focused Forestry Areas would compare and contrast to designated Wilderness Areas and to how NEPA is and would be handled within as compared to the site-specific requirements in areas outside these specially designated areas.

“The Wilderness Act of 1964 (Pub.L. 88–577) was written by Howard Zahniser of The Wilderness Society. It created the legal definition of wilderness in the United States, and protected 9.1 million acres (37,000 km²) of federal land. The result of a long effort to protect federal wilderness and to create a formal mechanism for designating wilderness, the Wilderness Act was signed into law by President Lyndon B. Johnson on September 3, 1964 after over sixty drafts and eight years of work.

The Wilderness Act is well known for its succinct and poetic definition of wilderness:

A wilderness, in contrast with those areas where man and his own works dominate the landscape, is hereby recognized as an area where the earth and its community of life are untrammeled by man, where man himself is a visitor who does not remain.

When Congress passed and President Lyndon Johnson signed the Wilderness Act on September 3, 1964, it created the National Wilderness Preservation System. The initial statutory wilderness areas, designated in the Act, comprised 9.1 million acres (37,000 km²) of national forest wilderness areas in the United States of America previously protected by administrative orders. The current amount of areas designated by the NWPS as wilderness totals 757 areas encompassing 109.5 million acres of federally owned land in 44 states and Puerto Rico (5% of the land in the United States).”[1]

Federal agencies are required to write management plans for these designated wilderness areas, subject to public involvement and environmental assessments or impact statements.  As an example, one management plan is for the Frank Church River of No Return Wilderness Area (FCRNRW), a 2.3 million acre wilderness near my home town of Salmon, Idaho, which was prepared by the Salmon-Challis National Forest[2].  This plan addresses issues such as allowable human activities like river rafting, hiking, horseback riding as well as permitted structures such as airstrips and cabins that were built prior to becoming wilderness and have been grandfathered in.  Also of significance is what fire management actions are permitted, which is an issue I’d like to expand on.

While some activities and structures such as rafting, hiking, horseback riding and existing structures and airstrips undergo site-specific NEPA analysis, decisions made to allow naturally ignited wildfires to burn unconstrained within wilderness areas do not undergo site-specific analysis.  By their nature, it would be impossible to determine the location, size and environmental impacts in advance of these events.  The assumption is that because these fires occur under natural conditions, they are basically “good” for the environment.  While true that wildfires can create environmental conditions that we humans would consider being “good” for wildlife habitat and for providing biodiversity, the reality that seems to be ignored by those promoting natural processes in wilderness areas is that wildfires left to burn unconstrained also cause significant negative environmental impacts to vegetation, soils, air quality, water quality, cultural resources, threatened, endangered and sensitive species habitat, sometimes on a grand scale as many communities in the West continue to experience first-hand. 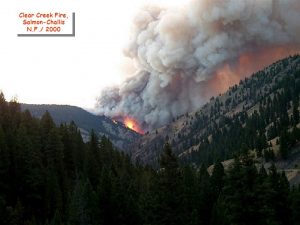 If the reader would like to see an example of significant negative environmental impacts resulting from wilderness fires, look no further than this YouTube video of a tremendous log jam on the fabled Middle Fork of the Salmon River that occurred in 2006 as a result of heavy rains within the 217,000[3] acre Clear Creek complex wilderness fire area of 2000 (portions of which burned outside the wilderness boundary): https://www.youtube.com/watch?v=mwbpg6YvV9w.  Or you can read this River Runners For Wilderness article about the same event as well as a second log jam the following year: https://rrfw.org/riverwire/no-blasting-logjam-and-strainer-year.

Yet this lack of site-specific analysis for wilderness fires is permitted under the Wilderness Act and associated wilderness management plans.  I’m not saying this is good or bad, but I’m making my case that it would not be setting a precedent for Congress to designate Focused Forestry Areas and allowing for the same programmatic approach for NEPA/ESA compliance.

How Focused Forestry Areas could be designated

One way I envision that Focused Forestry Areas could be designated would involve Congress directing the Forest Service and Bureau of Land Management to inventory and map areas that meet certain criteria such as those areas that have had timber management activities implemented since being required to undergo NEPA analysis in 1970, or since 1973, when the Endangered Species Act was enacted, causing some of the most restrictive requirements on timber harvests within our federal forestlands.  Chances are that many of the areas identified have had multiple NEPA analysis conducted over the past 45 years; does it make any sense to continue conducting analysis on the same piece of ground over and over and over again??

Existing harvest areas within wildland urban interfaces that have had at least one NEPA analysis completed in the past are prime candidates for designated Focused Forestry Areas. 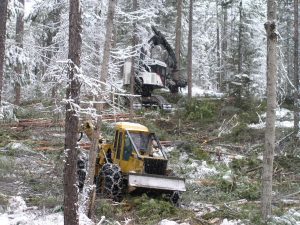 Once these areas have been generally identified and mapped, a public involvement process could be initiated to collaboratively identify those areas that would be acceptable for the Forest Service and Bureau of Land Management to make recommendations to Congress for designation as Focused Forestry Areas within each National Forest and BLM regional forestland.  Once Congress enacted the FFA, federal agencies would be required to develop programmatic management plans that would ensure sustained yield forest management in perpetuity within the FFAs.

If you think the concept of Congressionally designated and protected Focused Forestry Areas that are free of time consuming site-specific environmental analysis prior to every forestry activity and free of future restrictions on harvests due to encroaching threatened, endangered and sensitive species, then I’d suggest you forward this article to your congressional representatives and encourage them to consider this bold approach to increasing the pace and scale of active forest management on our federally managed forests. 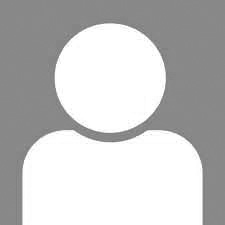 About the Author Eli Shotola 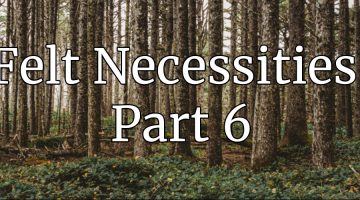