The State Of Our Forests

Welcome to the new Evergreen website where – to paraphrase our marketing team– we are making big changes in hopes of securing big results.

My gut tells me we are on the right track following a long hiatus in the Wilderness of Ideas. Although our website – and Evergreen Magazine – have been widely respected for many years, it is clear to me that the manner in which we discuss forestry – and federal forestry in particular – needs to be a lot more inclusive that it has been in the past.

Congress’ failure to reauthorize funding for the Secure Rural Schools Act underscores this need more powerfully than anything else I could say. I knew this day was coming but its reality is no less sobering for me than it might have been had I not already been steeped in the great divide that separates rural America’s cultural and economic values from those of the rest of our country.

In a column I wrote several years ago, I touched on what I believe to be the heart of this troublesome divide. “We fly at the speed of sound and compute at the speed of light,” I said. “But amid increasing urbanization, we have lost touch with the natural resource-based industries that make us the wealthiest, best fed and best housed nation in the history of civilization.”

Contrary to many, I don’t see this divide as a “red state blue state” issue. The stark reality is that most Americans saw Secure Rural Schools Act payments as an unwelcome form of welfare for counties that stubbornly refused to re-invent their economies in the aftermath of the politically mandated collapse of the federal timber sale program that supported them for decades. The fact that so many counties have no viable economic options seems not to matter in the wider world.

Google Secure Rural Schools Act and you will find hundreds of reports – academic and otherwise – that describe the Act’s intent. Thus far, no one has seen a need to translate these reports into a plain English explanation of the crisis facing counties that are surrounded by forests they don’t own and can’t tax that generate little or no economic activity in support of community institutions that have borne the brunt of the federal government’s decision to only minimally protect the public’s national forests from the mortal ecological impacts of insects, diseases and inevitable wildfire.

It would take you several weeks to read all of the material on our website that describes this problem and its solution. But, like the rural counties themselves, we have failed to marshal a set of arguments that resonate with most Americans. Friends tell me that most urbanites don’t care what happens in the rural West. I don’t believe this for a moment. What I do believe is that more Americans need to see reasons to join the conversation involving the future of the West’s great national forests.

Each of us owns an undivided interest in our national forests. We are stakeholders, just as surely as if our government had handed us stock certificates when we were born. As such, we have a responsibility to educate ourselves – to understand the history behind the Secure Rural Schools Act; why the federal government got so heavily involved in opening these forests to economic settlement a century ago, and why the government sanctioned development until the political winds began to reverse direction in the 1970s. Stakeholders who had supported the federal timber sale program for decades began to have second thoughts.

Friends tell me that most urbanites don’t care what happens in the rural West. I don’t believe this for a moment.In the weeks and months to come, we intend to dig deeply into citizen-led forest collaboration. These grass roots attempts at finding consensus on pathways to better conserve and protect the public’s forest resources hold more hope for conflict resolution than anything I’ve seen in modern history.

From what we’ve observed, these collaborations draw their strength and staying power from a mutually accepted understanding that nature is indifferent to human need. This is a sea change in thought among long time protagonists who, out of mutual respect, are engaging one another in a new dialogue that can hopefully provide a workable framework for congressional action aimed at restoring both at risk forests and forest communities.

The dead on countless political battlefields have been bayonetted one last time for good measure. Now it is time to sit and talk about a more peaceful means for resolving differences of opinion concerning the best way to protect and conserve our national forests.

Despite the misery it will surely cause in impacted counties, we see congressional failure to reauthorize Secure Rural Schools funding as a hopeful sign. The slate has been wiped clean of old ideas that did not work. Now we can start many new conversations – perhaps even a national dialogue that acknowledges that our rural and urban cultural, economic, environmental and spiritual needs are fast converging on the head of a pin.

It is time for forestry to cross the great divide.

Can collaboration work? We think it can, but stakeholders must hold fast to King Solomon’s biblical admonition: “With all they getting, get understanding.”

Next post The “Single Use Sustained Yield Act”: A Thoughtful Proposal 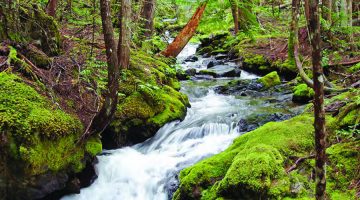