BLESSINGS, LUCK, AND A LITTLE BIT OF MAYBERRY

“It was downright scary in the beginning,” Schwartz says of what it was like the first time he navigated 80,000 pounds up and down winding, one-lane roads with turnouts that allowed loaded and empty trucks to pass within a whisker of one another. “You’re in mud or slush or snow or dust all of the time. You keep an open mind and learn everything you can from more experienced drivers, or you won’t make it.”

The first time Danny Schwartz took the wheel of a logging truck 28 years ago, the ride nearly scared him to death.

“It’s just a blast,” he says of his 14-hour days, which begin when his alarm goes off at 12:55 a.m. “The view from my office would make a great magazine cover.”

The affable Schwartz’s love affair with big trucks began when he was still a boy. Loaded log trucks passed his house on Smith Creek Road in Syringa, Idaho dozens of times every day. At 14, he wrangled his first job at Gus Denton’s cedar mill.

“I wanted a motorcycle,” Schwartz recalls. “But I knew better than to ask my dad for the money, so I talked Gus into hiring me.”

Denton must have had a keen eye for talent – or at least enthusiasm – because he allowed young Schwartz to drive every piece of big equipment in his mill yard: log loaders, lumber fork lifts and dump trucks. The boy was smitten, but the road ahead would be long and challenging.

“For the first three years I drove after high school, I wasn’t sure I was cut from the right cloth,” Schwartz admits. “Driving log trucks can be a little scary at times. You never graduate from this college because there is always something new to learn, like how a loaded truck handles on different soils,”

“Sure,” he replies. “We have a lot of different kinds of soil in forests around here. Some quickly turn into mud whenever it rains, and mud can be slicker than snow. Other soils contain some granite, so gaining traction is easier. You’d be amazed what you can do with a loaded logging truck in the dark on snow or mud.”

“I’ll bet I would,” I think to myself. “But do I really need a demonstration?”

Schwartz’ baptism under fire came the first time he drove a logging truck. The year was 1988. A friend who had been hurt, but needed to keep his haul job, asked him to drive the truck until he was able to drive again.

“He told me to get in the cab, and get as many loads as possible every day,” Schwartz recalls with some amazement. “He didn’t even go along for a check ride. His truck was a 1975 Kenworth with 13 speeds and a Cummins 350. That was how I got started.”

Schwartz drove his friend’s truck for four months. Then another truck owner called him, and he drove for him for two years.

“It was downright scary in the beginning,” Schwartz says of what it was like the first time he navigated his loaded, 80,000 pound truck down a winding, one-lane road with turnouts that allowed loaded and empty trucks to pass within a whisker of one another. “You’re in mud or slush or snow or dust all of the time. You keep an open mind and learn everything you can from more experienced drivers, or you won’t make it.”

Schwartz’ self-deprecating humor and his eagerness to improve kept him alive until joy finally overcame fear. Now there is no place he’d rather be at one o’clock in the morning than in the cab of his truck headed into the woods.

“We call it “Morning Joe,” he says of the CB radio chatter that splits the darkness. “Saturday Night Live has nothing on the ribbing we give each other. You should come along with me some time.”

I confess my own long ago log truck driving exploits, sans commercial license, and tell him I’d like to go again sometime, but he’d better off taking my wife. She, a concert trained cello, could entertain his eclectic and far-flung network of early morning road warriors.

We agree that it would be worth a shot. Julia isn’t so sure. Maybe a guitar or banjo would be a better fit, she gamely suggests. I now understand why Schwartz was voted “Class Clown” at Clearwater Valley High School. There is almost nothing he won’t try for a good laugh.

Schwartz waited until 2006 to buy his first truck, a fairly pedestrian 379 Peterbilt. Then, in 2011, he bought a hulking 2005 Peterbilt powered by a 600 horsepower Cummins diesel. Its Paradise Green body blends well with his six-foot-seven- inch frame. He can easily rest his forearms on its fenders – and does so with a wide smile when I ask him to pose for some pictures. His obliging wife, Dixie Rae, stands beside him – all five feet six inches of her.

The white stencil lettering on both doors reads, “David D. Schwartz, Grangeville, Idaho.” No company name and no fancy artwork. Just his name, and just above it, smaller lettering beneath the driver and passenger-side windows. It reads, “Dixie Rae.” A love story written on the door of a log truck. In all of the years they’ve been married, he’s come home every night.

“Some drivers’ jobs are so far from home that they overnight in motels,” Schwartz explains. “I’d rather get up in the middle of the night and get my first load before daylight. I get two loads a day on the job we’re finishing now, and I’m generally home to help with the chores by two or three in the afternoon.”

Although he loves his work, Schwartz candidly admits that he steered his own son away from driving log trucks. “You have to have your head in the right place every moment to do this work safely. It took me years to find and understand my own limitations. And we all have them. I’m not saying I wouldn’t encourage a young man or woman to give it a shot, but this isn’t as easy as it looks and these 320 mile days aren’t for everyone. And all of us who drive wish there was more monetary reward for the risks we assume.”

Despite the personal and financial risks he assumes every time he crawls into the cab of his truck, Schwartz readily concedes that he enjoys some priceless benefits.

“I’ve seen thousands of mountain sunrises through my windshield,” he says. “It’s hard to describe the feeling. I love being in the woods, and I love hauling logs. I pack a rifle with me during deer season, and I’ve taken a few deer home in the truck box, but no elk yet!”

Unlike many drivers, Schwartz does not have a truck shop on his property – unless you count the garden shed that sits next to where he parks his truck. Dixie Rae bought it for him. He keeps a few tools and cans of oil inside, but that’s all.

I’m a keep-it-simple kind of guy,” he explains. “The diesel shop here in town does the routine maintenance work on our truck and Les Schwab handles our tires. They’re the experts with all of the expensive tools.”

For the past eight years, Schwartz has driven for Grangeville logger, Jeff Adams. And like Adams, he loves Grangeville.

“It is the best of Mayberry,” Schwartz says of Grangeville’s likeness to Mayberry, mythical North Carolina town immortalized in the 1960s Andy Griffith sitcom. “We moved here 17 years ago. The support for us has been unbelievable. It is Schwartz’s way of saying without saying that Dixie Rae has nearly died a couple of times over the last two years. But she’s better now and hopes to return to her elementary school class room by year-end.

“What can I say,” Schwartz asks quietly. “The Lord has blessed us.” 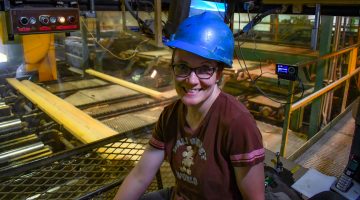