Should We Let Our Forests Burn?

The claim that ailing western forests can heal themselves if they are left alone seems based on a belief that pre-European forests and prairies were naturally functioning ecosystems uninfluenced by humans. But an enormous and growing body of physical, biological and anthropological evidence suggests this was not the case. In fact, millions of Indians were already here when white settlement began—and had been here for a least 12,000 years. Many lived in advanced, mainly agrarian, societies based on exploitation of natural resources including soil, water, minerals, trees, fish and game. They planted millions of acres annually and, where water was scarce, constructed elaborate irrigation systems. Fire was routinely used to clear land for crops, drive game animals, encourage berry production, clean campsites, ward off enemies and promote grass production, which attracted foraging animals, mainly elk and buffalo.

But if pre-European forests were not naturally functioning ecosystems, what then might happen if harvesting is banned and western National Forests are left alone to heal themselves?

“You don’t have to return to presettlement forests to see the likely result of a ban on harvesting,” says Steve Arno, Ph.D. fire ecologist at the Forest Service’s Intermountain Fire Sciences Laboratory in Missoula, Montana. “The years 1992, 1994 and 1996 were big fire years in the Intermountain west. They provide very visible evidence of what happens when forests are neglected: severe fires in ponderosa pine forests that historically had lower intensity burns, major losses of fish and wildlife habitat and degradation of air and water quality.”

Assuming eventual resolution of the harvest debate, Dr. Arno sees a more hopeful outcome. “With management—thinning, harvesting and a carefully controlled burning program designed to encourage growth in native plant and tree species—we can slowly reduce the risk of severe wildfires and disease, creating a more natural range of forest conditions, which is the first step in ecosystem restoration.”

Dr. Arno is not alone in his concern for the consequences of leaving western National Forests to heal themselves. Two of the country’s best known scientists agree with him: Jack Ward Thomas, Ph.D., wildlife biologist and former chief of the U.S. Forest Service and Chadwick Oliver, Ph.D., forest ecologist at the University of Washington and a contributor to the Clinton Administration’s Northwest Forest Plan.

“For ecological, biological and moral reasons, I oppose the ban on timber harvesting in National Forests,” Dr. Thomas said in a December interview. “Those who support the ban seem to believe it will prompt natural restoration of pre-settlement forest conditions. I think that is highly unlikely. Biologically speaking, eliminating harvesting, while continuing to control wildfires, would have significant adverse effects on bird and mammal species that thrive on early succession forest conditions.”

According to Dr. Thomas, a harvest ban accompanied by legislation that also permitted fires to run free would indeed open up overly dense forests, but it would also degrade air and water quality – environmental impacts he doubts the public would tolerate.

“If we ban harvesting, but continue to fight fires, we also move toward what we call mid-succession forests, which are far less diverse than young or old forests,” he explained. “I know of no species that finds its sole habitat in mid-succession forests. In managed forests, we solve the mid-succession problem by thinning, allowing light to reach the forest floor, thereby adding to biological diversity. But such thinnings would not be permitted were a harvest ban enacted.”

Dr. Thomas also has serious doubts about the government’s ability to successfully deal with the kinds of wildfires the West is now experiencing.

“The Yellowstone fire was a wakeup call for many scientists, including me,” he says. “Unless we soon begin the long process of dealing with diseased forests that are prone to very hot standreplacing fires, restoring natural ecosystems as we go, Yellowstone-scale fires are a serious probability. I know many people distrust thinning, fearing a return to the days when too much harvesting was occurring in National Forests, but I don’t see how it could happen. Far greater risks lie in accepting the idea that the best way to protect National Forests is to set them aside in no-harvest reserves. I’m a wilderness fan and would favor adding appropriate lands to the Wilderness system, but major portions of the National Forest System are not suitable for Wilderness designation and ought to be managed for multiple benefits, including commercial timber production.”

“To minimize the risk of environmental degradation, I suppose we would still try to control wildfires, but increasingly these fires are simply too large and dangerous to be put out as we would extinguish a house fire,” he said in a recent interview. “Until we start dealing with the underlying problem— overly dense stands of dead and dying timber—I’m afraid this situation will only get worse.”

Short of “blending harvesting and thinning programs designed to restore native species,” Dr. Oliver expects the onset of wildfire regimes “on a scale not seen since early in this century.”

“In a few hundred years, a more natural range of forest species and conditions would probably re-emerge,” he says, “but there would be great suffering in the meantime. In many places, the air we breathe and the water we drink would be polluted; exotic plants, animals and pathogens would invade our forests; lives would be lost and millions of acres of native habitat would be destroyed. Fortunately, restoration ecology offers many more acceptable alternatives. By carefully blending thinning, harvesting and wildland vegetation management programs, we can eliminate pests, protect habitat, reduce the danger of catastrophic fire and encourage recovery of native plant and animal species. Moreover, we can create many of the structural features and processes associated with old-growth forests, and we can do it in substantially less time than nature requires.” 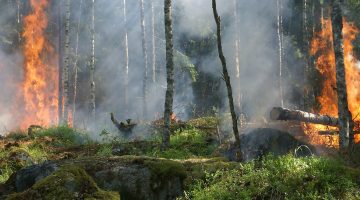