Since its inception in the aftermath of the Great 1910 Fire, the nation’s forest fire-fighting policy has been closely tied to a conservation ethic of near biblical proportion: waste not, want not. Among the articles of faith: prevent forest fires, salvage dead timber and promptly replant lost or harvested forests. The economic and environmental payoffs have been huge, but nowhere are the benefits more in evidence than in northwest Oregon. The Tillamook forest, scene of four horrific fires between 1933 and 1951, is today valued at more than $2 billion—166 times the state’s $12 million investment in salvage and reforestation. Thirteen billion board feet of timber were salvaged and 73 million seedlings were planted.

The benefits of prompt salvage and reforestation can be seen all over the Pacific Northwest. In northern Idaho, a new forest has risen from the ashes of the 1967 Sundance Fire, which destroyed more than 200,000 acres of old-growth cedar and hemlock. It is the same in southwest Washington, where 68,000 Weyerhaeuser acres were flattened by the 1980 eruption of Mount St. Helens. And west of the Cascades in both Oregon and Washington it is hard to find evidence of the 1962 Columbus Day Storm, despite the fact that hurricane-force winds leveled 30 million acres of timberland in just five hours . More than 70 percent of the 17 billion board foot blowdown was salvaged over five years.

Caring for forests is not as simple as it once was. Gone are the days when big fires were followed by big salvage logging and replanting operations—often begun before the smoke cleared. Gone too is the Forest Service’s belief that if it simply took care of the trees—growing, harvesting, replanting and increasing per acre growth yields—the rest of the forest would follow along. Now the agency is turning its attention to a far more perplexing problem: how to conserve the natural processes that power life, death and rebirth in forests. The sum total of these processes is thought to add up to something called “biological diversity,” a two-word term for which there are at least 85 different definitions, all of them conceptual, none of them quantifiable. Despite an agreed upon definition or a means of measurement, a new kind of forestry is emerging. Some call it ecosystem management, while others call it sustainable forestry . Either way, the objective is the same: conserve the natural processes that make forests diverse .

But long before the term “ecosystem management” was in vogue, the Forest Service was conducting field experiments in overstocked ponderosa pine forests, trying to figure out what combinations of thinning and prescribed fire worked best. Examples of this work can be found all over the West, but two of the more notable ongoing experiments are the Boise Basin Experimental Forest in southwest Idaho and Lick Creek in western Montana’s Bitterroot Valley. After years of periodic thinning and careful use of fire, both forests are beginning to look like the great ponderosa pine stands described by early day explorers, naturalists and westbound pioneers.

Such field experiments are of enormous value, not just because they show what is possible, but also because fire behaves differently in different types of forests, so forest restoration techniques must vary accordingly. For example, in warm, dry ecosystems, which make up about half the forest area in the Interior West, fires were frequent, but of low intensity. While favoring ponderosa pine—a thick barked species that thrives in full sunlight— such fires also limited the spread of thin-barked white fir, a prolific species that grows easily in its own shadow. But after fire was excluded, stand density began to increase and pine began to die out, leaving the fir to compete with itself. After decades, the result is plainly visible. The carcasses of dead trees litter insect and disease-ridden forests. They are destined to burn repeatedly, until there is nothing left to burn.

In cooler, higher elevation ecosystems, which are generally wetter, past wildfires were less frequent but more intense. (It was not uncommon for entire forests to be destroyed). But in the absence of fire, these forests are living longer. Montana’s Flathead National Forest is a case in point: eighteen percent of the Flathead was mature in 1899 and another six percent was old, but today 33 percent of the forest is mature and 20 percent is classified as old growth. As these forests have aged, insect and disease infestations have become more widespread. The result: larger, more intense stand replacing fires, not just in Montana or Idaho but also along the West Coast.

Few—if any—restoration projects have drawn more strident protests than a 1995 thinning in southern Oregon’s Siskiyou National Forest. Amid death threats and an Earth First demonstration, the Supreme Court allowed loggers to remove diseased timber surrounding an old growth fir stand the Forest Service wanted to protect. The thinning, which is not visible from a facing viewpoint less than a mile away, is expected to extend the life of the residual stand by many years, providing critical habitat for northern spotted owls that nest in the area.

Despite 30 years of successful field testing, and some visibly pleasing results, “Zero Cut” proponents still insist the best way to save National Forests is leave them alone and let nature do the healing. But because forests would presumably be allowed to burn down before naturally reseeding occurred, the healing process could take 200 years—perhaps longer—with no clear picture as to what the next forest might look like. Meanwhile, westerners would be forced to endure long years of smoke-filled skies, impacting both human health and tourist industries that depend on clear, sunny skies.

Among the West’s new environmentalists a more hopeful and more certain strategy is emerging. Rather than allow catastrophic fire to clear the way for the next forest, a variety of thinning techniques would be used to reduce the density of diseased and dying forests to naturally sustainable levels. Once density is reduced, controlled fire could be reintroduced to mimic the ecological effects of low-intensity burns that frequented these forests before white settlement began. Among the benefits such a strategy would have over catastrophic fire: far less loss of wildlife habitat, no loss of aesthetic or recreational values, minimal smoke, increasing diversity in plant and animal species, and no 200-year wait for the next forest.

As the thinnings are envisioned, most trees 100 or more years old would be left to grow larger while serving as a natural seed source for the next forest. There is some disagreement over just how many trees can be removed at a time without adversely impacting wildlife, and there is also some discussion about what to do with large trees that are infected with contagious diseases. Some argue they should be left to become snags, which provide habitat for birds and small mammals, while others say they should be removed before they infect healthy trees. Either choice seems infinitely better than simply allowing entire forests to burn up in increasingly ferocious fires. 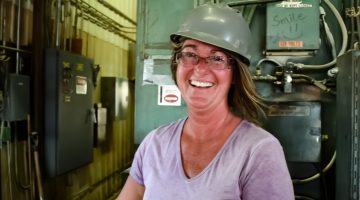