Counties on FireLetters To The EditorThe State Of Our Forests

Editor’s Note: Retired California businessman, Guy McMahan, sent us a copy of his response to the Forest Service’s Chetco Bar Fire Salvage Proposal. We were so pleasantly surprised by its thoughtful content that we asked him if he could clarify a couple of points he made in his original letter. We reprint it below.

Mr. McMahan owned two businesses – a wholesale nursery and a title company in Vacaville – for many years. He and his wife bought what he called “a fishing shack” at Brookings, Oregon in 1997, then retired there in 2014.The content and tone of his letter to the Forest Service leaves no doubt that he did his homework before responding to the agency’s request for comment on its draft fire salvage proposal.

I am disappointed with the Forest Service. Here are just a few of the reasons why.

Your request for citizen comment regarding your Chetco Bar Fire Salvage Proposal is written in “Forest Service speak,” an inappropriate language much too technical to be understood by most citizens living in our southern Oregon coastal communities. A well-illustrated plain-English document is what the public needs and should have at its fingertips when considering a proposal of this magnitude.

The Forest Service has not put its best foot forward in this proposal. It has failed to address the myriad issues confronting our communities in the aftermath of the Chetco Bar Fire. Deeply disappointing is the agency’s plainly visible adherence to its “let burn policy,” a risky and unjustifiable “management” choice that makes no environmental or economic sense in modern times.

With these two observations as my backdrop, I offer the following comments on your draft proposal to harvest fire-killed trees, as requested in the “Dear Interested Citizens” scoping letter of January 5, 2018.

Your proposal is woefully deficient and inadequate. It fails to address essential “safety from fire” requirements of the citizens and communities that lay within the boundaries of the Rogue River-Siskiyou National Forest.

In fact, “public safety” is mentioned only once in the proposal. Far more attention is devoted to the needs of the northern spotted owl, marbled murrelet, Coho salmon and other flora and fauna whose habitats were destroyed by the fire.

Where is the parity in this proposal? Wherein does the Forest Service address its concerns for public health and safety, or the recovery of losses – economic and intrinsic – that we citizens continue to suffer?

References to past fire salvage experiences under LMRP and the Northwest Forest Plan are preposterous. Fire salvage within the boundaries of the 2002 Biscuit Fire and the 1987 Silver Fire was minimal at best. To little salvage or mitigation work followed the Biscuit Fire. Its untreated scars provided the fuel for the Chetco Bar Fire.

Now we have the badly infected Chetco Bar scar. With one exception, this new wound is not much different from the Biscuit or the Silver wounds – the exception being that most of the citizens of Curry County now live within the Chetco Bar Fire scar.

The Forest Service’s abysmal won-loss record at Silver, Biscuit and now Chetco Bar [0-3] is a detriment to every living creature struggling to right itself within our fire-scarred landscape. Is this the best you can do?

Your proposal overlooks the fact that the 2018 fire season is only five months away. Protecting our citizens and communities by harvesting dead trees and reducing fuel loading levels should be the first order of business in your proposal. But it isn’t. Not even close.

Accumulations of dead and dying trees, surface fuels and understory vegetation will increase the intensity of our next fire. It will be uncontrollable by the time the Forest Service gets around to trying to suppress it. Where salvage and cleanup work do not occur, reburns are common. The only way to reduce the risk is to clean up the mess. Your proposal falls miles short of this objective.

The Forest Service must move quickly to establish a Fuel Load Reduction Safety Zone and get serious about reducing the fuel load that currently stands within five miles of our community and citizens. The entire Matrix AND the 85% of the land the fire burned has been withdrawn from consideration in this proposal – thanks to congressional set asides described in the scoping letter – now forms the Chetco Bar SCAR we see daily..

Common sense tells us that public health and safety will be improved by melding an appropriate Fuel Load Reduction Plan with salvage and harvest plans that sufficiently reduce the risk of reburns within our SCAR. This blending of goals and objectives must begin immediately, but there is nothing in your proposal that suggests it will.

The context for establishing a Fuel Load Reduction Safety Zone in which fuel loads will be significantly reduced is as follows:

In hopes of slowing advancing Chetco Bar flames, or perhaps to change its course and impede its progress, the Forest Service exercised its ability and authority to torch lands by starting back burns and controlled burns within the 85% lands reserved from this proposal without regard for the consequences.

Given that the Forest Service has the authority and ability to ignite backburns within these designated reserves, it follows that the agency also has the authority and ability to extend the salvage harvest and cleanup to these lands. Indeed, the Forest Service has a lawful obligation to clean up the massive fuel load scar created by the backburns and controlled burn activities.

The Forest Service also has a lawful public safety obligation to extend the salvage harvest and cleanup to the 85% reserved set aside, plus the full 25,000 acres of burned matrix lands, to create a Fuel Load Reduction Safety Zone in which the fuel load level will be substantially reduced.

How else might the Forest Service protect the health and safety of Curry County citizens whose home and property are near or adjacent to our Chetco Bar Fire scar? I can’t think of any other material actions that will achieve this goal. Can you?

The Forest Service is required to implement immediate fuel reduction activities and incorporate same in the current proposal. I propose that immediate action be taken to establish a Fuel Load Reduction Safety Zone.  If your agency has the authority to burn these lands, you also have the authority to harvest them. You cannot hide from this public responsibility.

In addition, I wish to support the following necessities:

The proposal does not include the larger-sized dead trees designated as “LSR” [Late Succession Reserve]; nor does it include the dead “matrix” trees in areas where some harvesting is permitted. As such, it is a complete waste of valuable timber resources that belong to the citizens of our country.

Historically, matrix trees with less than 50 per cent needle cover eventually die from the wounds flames have inflicted. These trees need to be salvaged, and the surrounding area needs to be re-planted immediately. Private landowners and Indian tribes do this all the time, and for many good reasons. Forest soils benefit. Water quality benefits. People benefit. Wildlife benefits. We all benefit.

Replanting only harvested areas, while untreated areas are left to decay, allowing only scrub brush to grow unchecked for decades, promotes an ideal setting for future fires vis-à-vis the Biscuit Fire. Has the Forest Service learned nothing since 2002?

Forest Service inaction will only add to the build-up of post-fire problems, further endangering citizen health and safety. Better that the public’s losses be salvaged and replanted immediately. Better for everything and everyone.

I also encourage you to conduct road maintenance activities to facilitate salvage operations and improve the existing road network. If a new road needs to be built or an old abandoned road needs to be revived, so be it. The safety of the citizens and our communities should be the Forest Service’s primary concern.

Speedy implementation of dead timber salvage and subsequent tree planting will insure that the public recovers as much of its economic loss as is possible. It will help support jobs and small businesses in our communities. To this end, the Forest Service should seek an Emergency Situation Determination to begin all work as quickly as possible.

It is not a given that the Forest Service shares our community’s grave concern for the environmental and economic damage done by the Chetco Bar Fire, or that it has fully embraced its responsibility to protect the health and safety of our citizens or coastal communities.

The fact that this proposal inexplicably ignores thousands of dead and dying “matchsticks” six to 10 miles from Brookings demonstrates a disappointing lack of regard and concern for the safety and health of our citizens. our economy and the environment. Remember, the Chetco Bar Fire travelled six miles in one day. Lightning will strike again.

Article Name
The Chetco Bar Fire: Old Scars, New Wounds
Description
The Forest Service’s abysmal won-loss record at Silver, Biscuit and now Chetco Bar [0-3] is a detriment to every living creature struggling to right itself within our fire-scarred landscape. Is this the best you can do?
Author
Jim Petersen
Publisher Name
Evergreen Magazine
Publisher Logo

Previous post The War on the West, Part II 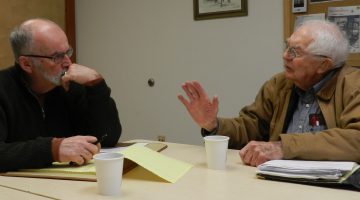