EnvironmentFeaturedThe State Of Our Forests

Bruce Courtright: An Open Letter To The 2016 Presidential Nominees

U.S. Forest Service retiree, Bruce Courtright, and several of his retired colleagues composed this open letter to the nation’s 2016 presidential candidates before their formal selections last summer. We held their well-done letter until now, believing as we do, that our best chances for attracting the attention of strategists in the Clinton and Thump organizations is now.

Likewise, it is our belief that high ranking supporters of both campaigns are watching our long running series of interviews with collaborative groups. We regard these groups – and the congressionally blessed work they are doing, as the best hope for pulling our nation’s publicly-revered national forests back from the brink of ecological collapse.

Mr. Courtright, who chairs both the National Wildfire Institute and the Coalition of Fire Safe Councils, writes from his home in Fort Jones, California.

Herein, we present one of two timely essays.

An Open Letter to the 2016 Presidential Nominees:

Our country’s National Forests – once viewed as the gold standard by which all other public forest ownerships were judged – are dying and burning by the millions of acres annually. Their precipitous decline signals a forest health crisis unprecedented in American history.

As candidates for the highest office in our land, this crisis falls squarely on your shoulders. It demands decisive action, not just to protect endangered communities, but also municipal watersheds vital to millions of Americans living in western cities.

Our national forests constitute a national treasure. They provide a wealth of year-round recreation opportunity, solitude from the stresses and strains of daily life, and critical habitat for hundreds of threatened or endangered fish, wildlife and plants.

Suffice it to say, our citizens can ill-afford to stand by while these treasured landscapes burn to the ground in catastrophic wildfires. Fortunately, advancements in the forest sciences provide well documented on-the-ground solutions to this crisis. One of you will be tasked with making certain that Congress and our federal land management agencies implement them.

Although many pundits view the rapid decline of our national forests as a disaster in the making, I would hope that you would view this crisis as an opportunity not unlike that which faced Theodore Roosevelt – our nation’s conservation president. In 1905, the year he signed legislation creating the U.S. Forest Service, he also set aside 16 million acres in western forest reserves that became national forests. These forests – among others – are now imperiled by insect and disease infestations that lead to inevitable wildfire.

Of the many statements that Roosevelt made about conservation, none seems more timely or appropriate than this from his “Confession of Faith” speech, delivered at the Progressive Party’s National Convention in Chicago, August 6, 1912:

“There can be no greater issue than that of conservation in this country. Just as we must conserve our men, women and children, so much we conserve the resources of the land on which they live.”

It must be understood that in 1905, “conservation” was closely aligned with resource management, which, in turn, necessitated developing the timber and mineral resources within our national forests. He made his beliefs abundantly clear in remarks made before a 1903 organizational meeting of the Society of American Foresters:

“And now, first and foremost, you must not forget for a moment the object of our forest policy. That object is not to preserve forests because they are beautiful, though that is good in itself, nor because they are refuges for the wild creatures of the wilderness, though that, too, is good in itself; but the primary object of our forest policy, as of the land policy of the United States, is the making of prosperous homes. It is part of the traditional policy of home making in our country. Every other consideration must come as secondary.”

Until World War II ended, our national forests remained largely inaccessible, and most of the nation’s timber was harvested from private forestlands, including the 60 billion board feet of lumber consumed by military units during the war.

President Franklin Roosevelt’s domestic advisors were the first to see the West’s great national forests as economic engines capable of powering the country’s rapid transition from wartime to peacetime footing – a transition Roosevelt considered vital to quelling fears that the country might lapse back into Depression following the war.

Following Roosevelt’s death in 1945, the task of opening the West’s timber-rich national forests fell to the Truman and Eisenhower Administrations. With strong public support, Congress, the Forest Service and the Bureau of Land Management worked at a feverish pace. Millions of jobs were created in forests, sawmills and plywood plants, and millions of homes were built for homeowners who rode a wave of prosperity unlike any the world had ever seen.

But by the 1970s, the nation’s social and economic values were changing, and so, too, was the meaning of the word “conservation.” Its timber management emphasis fell out of favor, to be replaced by a much greater emphasis on preservation in no-management reserves.

Many factors contributed to this reversal, not least the failure of federal resource managers and the timber industry to recognize that public values were changing – and that the visual impacts of logging, momentary though they were, had angered millions of Americans in the same way they had been angered by the wanton destruction of eastern forests in the years leading to Teddy Roosevelt’s presidency.

Over the years, these laws have been subjected to numerous interpretations and re-interpretations by federal courts whose values mirrored those of a citizenry less supportive of active forest management, including logging, and more supportive of many outdoor recreation activities, including hunting and fishing. Although most rural Americans view these activities as compatible, most urban Americans do not. The resulting political skirmish – decades in the making – has become a political minefield where few in Congress have been willing to tread.

As President, the task of pulling these well-intentioned factions to the moral high ground falls to you. The Gordian knots that now tie the hands of our resource management agencies must be loosened. If they are not, the very national forests we are all trying to protect will be lost to catastrophic wildfire. The resulting environmental and economic losses will erase more than 100 years of progress in science, environmental protection and what Teddy Roosevelt so accurately termed “the making of prosperous homes.

You can be forgiven for asking how on earth we got ourselves into this mess. The surprisingly simple answer is that we got here by not paying attention – by not recognizing that our national forests were changing in unnatural ways, and by not asking ourselves why these changes were occurring or what we could do about it.

And the change? Reduced to the simplest description I can conjure, our western national forests have too many trees for the carrying capacity of the land. How many is too many? In some forests, we can now count 1,000 trees per acre, where a century ago there may have been no more than 20. Stressed by prolonged drought, these forests are easy prey for root diseases and insects capable of detecting weakness. At this writing, somewhere between 70 and 90 million acres of national forestland in the West are in what fire ecologists call “Condition Class 2, or Condition Class 3.” Class 3 forests are ready to burn, and Class 2 forests soon will be.

As dire as our situation has become, it is fixable with bold leadership from the in top. Below, I offer some observations and suggestions based on my Forest Service years – years in which it was my privilege to work with some of the finest forest scientists in the world; and likewise some of the most accomplished “boots on the ground” foresters our universities have ever produced. Let us not forget of lumbermen who have invested their lives an fortunes in the development of wood processing technologies needed now more than ever.

I don’t know anyone today who pines for a return to “the good old days” when timber was the principal product of our national forests. Those I know and respect see timber as a by-product of a much more encompassing strategy designed to meet the original goals of the five federal laws mentioned above. But “getting there” requires the implementation of grand scale thinking not unlike that associated with the Marshall Plan for rebuilding Europe following World War II.

Now to my thoughts, which mirror the best thinking of hundreds of men and women who work in forest policy, basic research, applied science, manufacturing technology wood processing and all of the elements of on-the-ground management including logging and reforestation.

Next post Bruce Courtright: The U.S. Forest Service...Headed For Extinction Or Revitalization? 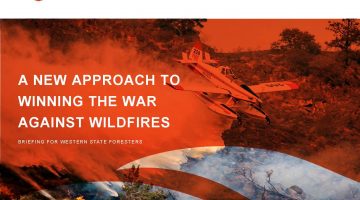